Everything you Need to Know about Piano Chords

A chord is a blend of more than one note played simultaneously. So whenever you sit at the piano and play more than one key at the same time, you have played a chord. However, chords most commonly used in music have particular characteristics.

The main kind of chord is the triad which is a three-note chord. So, triads all have three notes each. Among these, the first note is the root note which is the defining note of the chord. It is always written in capital letters. For instance, if the first chord of your song is C major, your chord begins with the note C.

The note that comes in the middle of the triad is called the third. It is an extremely important note as it gives definition to the chord as a minor or major chord. While a major chord carries a happier sound to it, a minor chord sounds a little sad and dark.

Now coming to the top note of the triad. Interestingly, it is called the fifth. It adds weight and stability to the chord and closes out the triad aurally. The fifth plays an important role in defining the chord as an augmented one or a diminished one. In terms of sound, an augmented chord sounds weird and bizarre while a diminished chord sounds chilling and menacing. It is always useful to create an association with how a chord sounds as the more you can define a chord by sound the quicker you will connect with it. 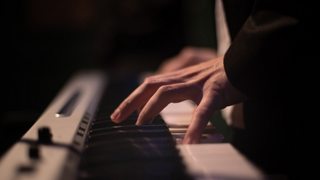 TYPES OF CHORD SHAPES YOU MUST KNOW

The similarities between all the above chord shapes are that all of them use the same fingers and only use white keys which are all natural notes. 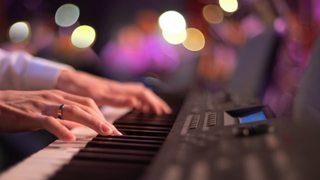 HOW TO TURN MINOR CHORDS INTO MAJOR CHORDS & VICE VERSA

A great way to increase your knowledge of chords is to learn how to change minor ones onto major chords. The difference between the two lies in the middle note of the chord or in the third. The third in a major chord is a key higher than in a minor chord. Therefore in order to change the minor chords, you already know into major chords all you need to do is raise the middle note by one key. So to play D major triad, push down D with your thumb, the black key above F with your middle finger on and A with your little finger. To change major chords into minor ones all you have to do is reverse the process. This way, you will know enough chords.

For more about chords, please see our Piano or Keyboard courses.